Enough to break the ice.

Fortunately, you lucky lads and lasses don’t need to resort to horrible (read: horribly funny) lines to get to know Camille. I took care of that for you. So sit back, swipe right, and read even more reasons to register for MindFUEL+Writing on March 7th!

1. Her energy is as buoyant as the curls in her hair.

2. Visit her website to learn even more about her.

3. You’re missing out by not reading the long version. 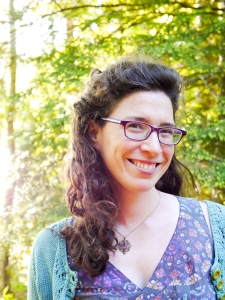 Describe your relationship with writing. What was the transition like for you when it became your profession?

I saw myself as a “real” writer from the time I was in college, dashing off opinion pieces for the student newspaper each week, and I started my practice novel my senior year. (That’s the first thing I’d advise anyone starting out: give yourself permission to be a writer. Don’t waste any creative energy feeling embarrassed that you aren’t published yet. A writer writes. You’ve made a habit of stringing words together on paper, so that’s who you are.)

After graduation I got a job as an editorial assistant, learning a great deal about the publishing industry from the inside. After two years at HarperCollins, I moved to Ireland to get my M.A., and often stayed up until 5am drafting my debut novel. I guess you could say I became a professional soon after I got my master’s degree, when I returned to Ireland to write a Moon travel guide from scratch. Guidebook research kept me busy enough that I didn’t obsess as my agent started sending the manuscript out to publishers. (I got the good-news phone call at a hostel overlooking Killary Harbor in Connemara.) Looking back on it now, I see it was a series of small steps toward making a living at it—as each transition presented itself, I felt relatively prepared.

Do you have any writing or creativity quirks or superstitions? What do you experience when they’re not followed?

I generally start the day’s writing with a cup of coffee or black tea (what can I say, caffeine is my one vice!) I guess it’s the ritual of the cuppa (as the Irish say), that nestling in and getting cozy with my books and notes and laptop, that helps me ease into work mode. (Honestly, being up to our eyeballs in snow right now, it’s hard to remember what this morning ritual looks like in the summertime. I seem to recall making iced coffee and drinking it out of a Ball jar.)

Even when I’m tea’d or coffee’d out, I always have a glass of water on the desk. You can stay focused for longer periods of time when you’re well hydrated.

Developing a dedicated yoga practice has definitely broadened my channel, as it were—I get some seriously terrific ideas in the middle of class. My favorite example is from last winter when I was working on my 2016 novel, Immaculate Heart, which is about an American journalist who investigates a Marian apparition in a small town in Ireland twenty years after the fact, and falls in love with one of the women who saw it. (Her name is Síle, pron

I took Fiona’s 6pm Jivamukti class, and while I was in Warrior 1 I looked up at my hands—at the narrow space between my thumbs—and I saw Síle as a small child putting her lips to a crack in the wall above her bed, whispering into it like she was actually talking to someone on the other side. When I get a shiveringly good idea like that I walk out of yoga class feeling even more awesome than usual. No doubt the physical practice gives my brain the time and space to finish drawing the connections I’ve sketched out during the workday. (I’ve also received some really cool visuals during meditation at the beginning or end of class—I’m getting back into drawing after a long hiatus, and at some point I will definitely illustrate the things that “came through.”)

In yoga, there is a philosophy that everyone creates their own stories that bind them to an experience. The more freedom a yogi has from a story, the more present and mindful a person can be to the moments in life. This is why renunciation was so essential on that historical path. As a writer you CREATE stories, and I imagine are most successful when you LIVE in your characters’ minds. As a yogini and a writer, do you have any thoughts or comments about this juxtaposition of ideas?

I’ve been thinking a lot lately about this concept of believing the stories we tell ourselves, particularly when it comes to what we are capable of. In writing workshops and yoga classes alike I’ve heard so many people say “I’m just not good at that” or “I’ll never be able to do that.” As a workshop facilitator I gently try to get students to examine these assumptions they’ve made about who they are and what they’re able to accomplish. Limiting beliefs are insidious that way—it can be extremely difficult to take a step back and notice the story when you’ve been stuck so firmly inside of it for most (if not all) of your life. (After all, many of the stories we tell ourselves were handed to us by our parents, other family members, or teachers.)

This is why I wholeheartedly believe in gifting yourself with workshop and retreat experiences in which to engage in the glorious though often-messy process of self exploration. You learn so much, not just from your facilitators but from your fellow students too.

There’s much more I can say in response to your wonderfully juicy question, Brynne, but I don’t want to get into tl:dr territory here, so how about we save it for another post?  🙂

What are you hoping students will take away from our MindFUEL workshop? 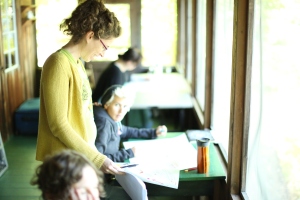 Above all, I want our students to feel empowered. I want them to get really excited about tapping into their creativity through a combination of asana practice, meditation, and intuitive writing, so that they leave the studio feeling like they can do and be absolutely anything they choose. I hope they’ll remember that they can create a transformative experience for themselves anywhere, at any time, and under absolutely any conditions.

Join us at 338 Newbury Street at Karma Yoga Studios on March 7th!

Take the Microphone: What do YOU think? Cancel reply